skip to main | skip to sidebar

This is one of my favorite training hikes in the area, and it can give you a real sense of doing something -- it certainly gave me that sense last weekend. One of my climbing partners, Todd, and I decided to kick off our training for the summer alpine climbing season with a weekend of winter camping and a long hike with light packs from Devils Lake to Parfrey's Glen and back on the Ice Age Trail. My best guess is that this puts the round-trip distance around 16-20 miles. 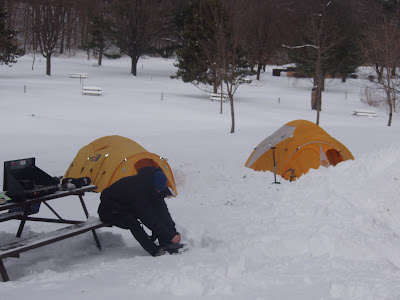 We both arrived late Friday night under a full moon, entering the park around 10:00pm, by the time we had camp setup at the Quartzite campground, dinner cooked and a few beers consumed it was just after midnight. It was cold, but we were prepared with weather appropriate tents and sleeping bags.
Saturday morning found us slow to get started and our hike finally got under way around 11:00am. Leaving us about 5.5 hours of daylight to complete a 16-20 mile hike over hilly terrain covered in ankle-to-knee-deep snow. Obviously that was not going to happen, so we packed our headlamps -- well I packed my headlamp at least.

We hiked up-and-over the hill from the Quartzite Campground to the North Shore Visitor's Center to make a quick check on how the Parfrey's Glen closure would affect our trip. The ranger there said that the Ice Age Trail was open, but that we should not go up into the canyon at Parfrey's. 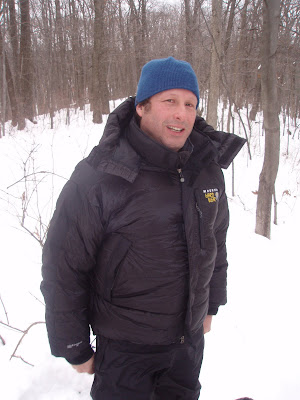 We crossed the north shore parking lots and the train tracks, then we started breaking a trail up to the East Bluff Trail via a shortcut just behind the bathrooms. It gave the morning a bit of an alpine flair and got our blood pumping. We shed a few layers once we joined the East Bluff Trail, which was fairly boot-tracked, then continued up towards Elephant Rocks, where we shed a few more layers. We followed the East Bluff Trail to its junction with the CCC Trail, where we cut north through woods to join the Upland Trail. We broke trail alongside the Upland Trail because it had been groomed for cross country skiing and we did not want to disturb the tracks. The Upland Trail led us to its junction with the Sauk Point Trail which took us across Hwy 113/DL and up to Sauk Point, the "summit" of Sauk County, and then down into the Parfrey's Glen canyon. The Sauk Point Trail was boot-tracked for about a half-mile from Hwy 113/DL, but then became untracked and heavily drifted for a long section, before eventually becoming fairly well tracked again for the remainder of the way to Parfrey's, starting a half-mile or so West of the trail's junction with Solum Lane.
Above right: Todd feeling confident midway through the day.
Below: Todd feeling the cold on our break. 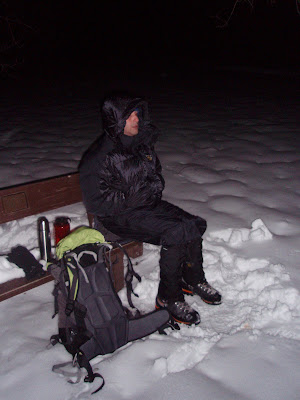 We arrived at Parfrey's shortly after sunset, and decided to take a half-hour break in order to eat and hyrate. After our break we set off under the light of the full moon, and the glow from the lights at Devil's Head being reflected by the clouds. I figured it was best to conserve batteries in my headlamp since Todd had neglected to bring his. We were making good time and put about a mile behind us on the return leg of the hike when I started limping. First my left knee, and then my right, which prompted Todd to ask, "Are you limping?"

"Yes, but it will go away in a few steps." I replied, and it did, but then it came back along with some audible clues like deep, deliberate exhalation, and what can only be described as the sound of a low-frequency/pitch horse nay.

"You're not looking so good." offered Todd.

"I'll be fine, I...just...have...to...walk...it..." I forced out in a breath-held crescendo punctuated by a final burst of air seeming to drive the word, "...OFF!" out in what seemed like the climax of some victorious struggle to speak without collapsing.

"We need to go back to Parfrey's and call someone for a ride." Todd thought aloud.

"But, who? Coach? Suzanne? Marc and Lollie? Susan? A taxi service in Baraboo?" I responded. "I'll text Jay for Coach's number."

"Okay." I said, taking a step, "Hey, they don't hurt anymore, I can keep going." five uphill steps later, "No I can't." flopped out in an exasperated tone.

Jay got back to me with Coach's number, and I figured he was the best choice for a rescue because he would probably get a kick out of the whole thing. To my dismay Coach was out and the only answer was his machine, I didn't leave a message. Next I texted Suzanne, who was not in the Baraboo area, and unfortunately neither was Susan she informed me. A phone call to Marc and Lollie was next, but it was busy. More texts exchanged with Suzanne trying to find a solution, but none was forthcoming. Finally Todd called a taxi service in Baraboo, and they were less than helpful even when Todd explained the situation to them. So we continued down, and I fashioned a pair of makeshift walking sticks to aid me on the trip. I called Marc and Lollie again, but it was still busy, I tried coach again and again got the machine, but I left a message this time, "Coach, it's James, give me a call sometime, well actually tonight if you could. I'm at Parfrey's Glen, and I can't walk, well I can, just not very well. I'll be okay, I'm with my buddy Todd, and we're prepared for the weather." Reading this now, it sounds horrifying, but I'm pretty sure the near laughter in my voice told another story. At this point there wasn't much else to do but laugh at the absurdity of the situation, I was after all in need of a rescue from a harrowing epic at a State Park. One more call to Marc and Lollie, and we got an answer. Marc was on his way and we were saved.
Broken, but all smiles because it's over. 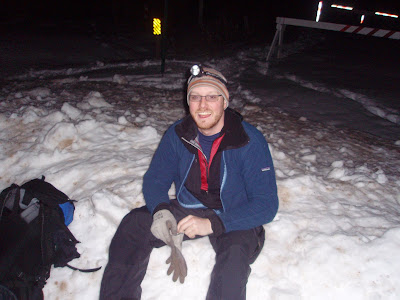